A word of caution about the Society of Saint Pius X 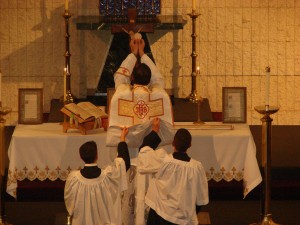 The following comes from an August 6 Madison Catholic Herald column by by Robert C. Morlino, Bishop of Madison

The 50 years since the close of the Second Vatican Council have been tumultuous for the Church. Forces both inside and outside of the Church tried to distort and exploit the council and the post-conciliar liturgical reforms to create a new Church after their own image.

Too many of us endured years of sloppy or irreverent liturgy and mushy or even unorthodox preaching and catechesis. Too often when we voiced our concerns we were ignored.
Most of the faithful Catholics who saw this happening fought hard for a “reform of the reform.” Sadly, others decided that the only way forward was to work outside of — and sometimes against — the hierarchical Church and its structures.

This was the choice made by the Society of Saint Pius X (SSPX), a worldwide society of priests best known for its strong opposition to the post-conciliar reform of the Mass. The Masses that they celebrate in their own chapels according to the 1962 Missal have attracted sizeable communities of the lay faithful, even here in the Diocese of Madison.

I want to be cautious and fair about the SSPX. Many of their concerns are legitimate. Many of their values and aspirations are admirable, and their zeal is impressive. Their priests wish to serve the Lord and His people. The people who attend their chapels are fervent.

We should always be cordial, respectful, and welcoming to them as brothers and sisters in Christ. Yet, their relationship with the Church is complex and developing. Moreover, the situation of SSPX bishops, of SSPX priests, of the faithful who formally align themselves with the SSPX, and of the faithful who occasionally or informally attend Mass with the SSPX, are all different in important ways. It would be inaccurate to call it a schismatic group in a strict sense, and we should all pray that it may someday be fully reconciled with the Church.

Having said that, all is not well with the SSPX, and my advice, my plea to the traditionally-minded faithful of the diocese is to have nothing to do with them. As Pope Benedict XVI made clear, the SSPX “does not possess a canonical status in the Church” and its ministers “do not legitimately exercise any ministry in the Church” (March 10, 2009, Letter to the Bishops of the Catholic Church).

The priests of the SSPX are validly ordained priests, but because for the most part they were ordained illicitly (i.e., by a bishop who had no jurisdiction over them and no permission to ordain), they are suspended ipso facto from the moment of their ordination (c. 1383); that is to say, even though they are ordained, they have no permission from the Church, which is necessary, to exercise priestly ministry.

Their Masses are valid but are illegitimately celebrated. The same is true, in most cases, with their baptisms, their conferral of the anointing of the sick, and provided it is administered by a bishop, their confirmations. Thus, Catholics should not frequent SSPX chapels or seek sacraments from the priests of the SSPX.

But there are two other, serious, sacramental problems that must be understood by everyone who may wish to attend SSPX chapels. If you take nothing else away from this letter, at least hear this — the SSPX’s marriages and absolutions are invalid because their priests lack the necessary faculties.

The SSPX argues for the validity of their marriages and absolutions based on the canonical principle that the Church supplies the faculty in cases of doubt or common error. In certain rare and exceptional cases that might apply to their situation, especially with regard to confession, but for the most part their arguments are not persuasive.

Part of their argument hinges on the faithful erroneously believing that the SSPX priests have the requisite faculty; well, if you were in error about that up until now, you are not in error anymore.

The SSPX also makes the argument that they have permission because the Church is in a state of “emergency.” However, 1) the Legislator (the Pope) and the bishops with him don’t think there is a state of emergency, and 2) the sacraments offered by the SSPX are already widely available at legitimate parishes and chapels, i.e., no one is being denied the sacraments.

This is not the place for a discourse on the technical points of canon law, but the point is: do you want to take that kind of a risk with your marriage or even with your soul? Apart from legal and sacramental concerns, there is also the danger that affiliating with the SSPX can gradually cause one to absorb a schismatic mentality.

You might attend your first Mass at an SSPX chapel for good and noble reasons, e.g., such a strong initial desire for a reverently celebrated liturgy that you are willing to tolerate the SSPX’s irregular status. But as you attend more and more, it ceases to become something you tolerate and starts to become a mark of identity, even a badge of pride. You adopt a fixed posture of separation from the Church. That is a perilous position for any soul to be in.

[Comments for the article closed 8/16]