How does this quiet priest help convert wealthy conservatives? 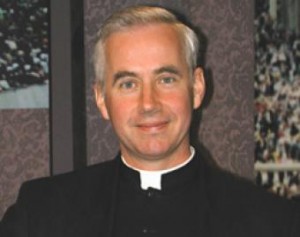 The following comes from a New York Times June 12 article by Mark Oppenheimer:

Last fall, I traveled to Palo Alto, Calif., to meet the man with the unusual gift.

Some priests are known for their work among the poor, others for their learning, still others for decades of service to a parish. The Rev. C. John McCloskey III, a priest of the traditionalist Opus Dei order, has a different calling. He makes converts, often of the rich and Republican.

He has personally prepared for conversion to Catholicism, among others, Gov. Sam Brownback of Kansas; the Supreme Court nominee Robert H. Bork; the columnists Robert D. Novak and Lawrence Kudlow; the conservative publisher Alfred S. Regnery; the anti-abortion activist Bernard Nathanson; and Lewis E. Lehrman, an investment banker and former candidate for governor of New York.

Father McCloskey, 61, is hardly the only conservative priest or minister. But few have his knack for persuading political conservatives to adopt a different religion.
In Palo Alto, where Opus Dei sent him in 2013 after a period in Chicago, Father McCloskey and I shared a late-afternoon cocktail. He talked about his college years, his time on Wall Street and his calling to become a priest. I had expected to be overwhelmed by charisma and instead was drawn in by gentleness. He listened more than he spoke, asked about my family, touched my arm several times.

Then, when it was over, Father McCloskey surprised me by asking that I not quote him. Opus Dei would not let him speak on the record.

So, to learn more about him, I turned to some of the men and women whom Father McCloskey has counseled.

When I asked what made Father McCloskey so successful at persuading people to join the church, I heard the answer, counterintuitive in its simplicity, that he befriends people, whether they ask for it or not.
“Once Father John gets his claws into you, he never lets go,” said Mr. Kudlow, who was fighting addictions to alcohol and cocaine when he met Father McCloskey in the 1990s.

“He reaches out and gives you that kind of companionship, and stays in touch,” Mr. Kudlow, now clean for almost 20 years, added.

Shortly after he began counseling Mr. Kudlow, Father McCloskey suggested that he go to church. Mr. Kudlow found that he loved Mass, and in 1997, he was baptized Catholic.

Mr. Brownback and Mr. Lehrman did not respond to requests for comment. Nor did the presidential candidate Rick Santorum, whose son was baptized by Father McCloskey. But Mr. Regnery, whose family firm has published William F. Buckley Jr., Ann Coulter and Dinesh D’Souza, did respond, effusively.

In the 1990s, dissatisfied with the Episcopal Church, Mr. Regnery attended two weekend retreats run by Father McCloskey. They became friends, and in 2006 or 2007, he became a Catholic.

Father McCloskey knows that many men “don’t have any friends but their wife,” Mr. Regnery said. “He’s the kind of person, I guess, that if he weren’t a priest, you’d still want to befriend.”

In “Good News, Bad News,” his 2007 handbook on evangelism, written with Russell Shaw, Father McCloskey described the malady of “friendship deficit syndrome,” which he said was “a much bigger problem for American men than it is for American women.”

Men today, he wrote, move often for work, which is bad for friendship. All-male schools and social clubs have gone away, depriving men of separate spheres for bonding. Working women need their husbands at home, helping, instead of out socializing with men, which makes them worse husbands by depriving them of the opportunity to practice friendship.

Finally, he wrote, gay culture has hurt male friendship because, “especially in big cities, two men or a small group of men seen socializing” are likely “to draw stares from others and the unspoken question ‘I wonder if they’re gay.’ ” Thus, “many heterosexual men skip the hassles and the embarrassment by not socializing much with other men.”

As an anthropologist of urban male culture, Father McCloskey may hold eccentric views. As a political prognosticator, only time will tell: He has predicted that “culture of life” states, mainly in the South, might someday secede from the pro-gay, pro-abortion-rights rest of the country.